Why Elephants Don't Belong In Zoos

Wondering where Billy will go if he is released from the Los Angels Zoo? 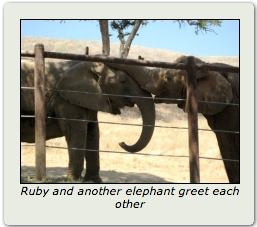 Check out PAWS Sanctuary in San Andreas where Billy will live out the rest of his days in the company of other elephants (PAWS is Home to 3 Asian and 5 African Elephants), varied natural terrain to roam, lakes to bathe in, and state-of-the-art elephant barns equipped with heated stalls and therapeutic Jacuzzis.

In 2007, another LA Zoo elephant named Ruby (see photo to right) was sent to this 2,300 acre haven to live out the rest of her days in peace. She lived in the sanctuary until she passed away in 2011 from injuries she sustained while living in the zoo. We hope that, like Ruby, Billy will get to spend the rest of his living roaming free.

The zoo has experienced many problems with keeping captive elephants, but the overriding problem and the leading cause of death to all of the zoo's elephants has been chronic foot sores, abscesses, arthritis, and joint disease cause by prolonged confinement in an enclosure that is too small for these massive land mammals.

In the wild, elephants walk for miles every day.  When elephants are confined to a 3 or 4 acre enclosure, they are unable to meet their daily exercise needs. Elephants that are kept from meeting their daily exercise needs experience both physical and psychological stress. Billy, for example, is already showing symptoms of mental and physical injury due to his prolonged confinement in his small enclosure.  Sending Billy to a sanctuary and eliminating the elephant exhibit at the LA Zoo will not only improve the overall welfare of the animals but will also free up lots of public funds. Redirecting the funding will provide more space for other zoo inhabitants and will allow several other animal exhibits to be renovated and improved.  Closing the elephant exhibit will be a win not only for the elephants but for all the other zoo animals, as well.

Visitors, adults and children alike, at the Los Angeles Zoo comment on the sad, repetitive behavior of the zoo's elephants. Namely, many visitors report seeing the elephants 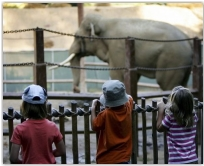 incessantly bobbing their heads up and down, day in and day out. This pitiable display typifies stereotypic behavior, or repetitive, nonfunctional behavior often witnessed in captive animals. Stereotypic behavior is considered a sign of psychological distress, so the elephants' bobbing is a response to their lonely and unnatural existences.

Elephants do not naturally live in isolation and require intense social interaction with other elephants, yet Billy has been alone for many of his years at the LA Zoo. He bears the scars of his years of isolation.

Like other urban zoos across the country, L.A. Zoo is unable to provide the vast acreage needed by elephants, who can walk a hundred miles a day in the wild and have home ranges of 120 square miles or more. Billy provides a clear example of how zoos put business interests far above the welfare of elephants.

We are very close to freeing Billy and stopping the practice of keeping elephants at L.A. Zoo.